All photos by Daryl Henderson

When people of diverse spiritual backgrounds open up to one another with respect, curiosity, and a sincere desire to discover common ground, partnerships and friendships can evolve in profound and unexpected ways…

At a time of great challenge in the world and in the Middle East, a diverse interfaith and intercultural group—Holy Land Living Water—journeyed to Jordan, Palestine, and Israel with the mission of the celebration of the world interfaith harmony week of the United Nations to enhance interfaith harmony, sharing interfaith events, collaborating in peace-building projects, and supporting programs to promote social well-being through ecological sustainability. Co-sponsored by UNITY EARTH, EcoPeace Middle East, and United Religions Initiative (URI), the delegation comprised ninety-two people from around the world, including Jews, Christians, Muslims, Buddhists, Hindus, Baha’i, Sikh, indigenous and interfaith spiritual leaders, social entrepreneurs, academics, diplomats, musicians, ecologists, filmmakers, and peace activists. Rabbi David Rosen, Advisor on Interreligious Affairs to the Chief Rabbinate of Israel, was a patron for the event. Our mission was to bring a spirit of harmony and peace to the ancient sites and modern communities we visited and to serve as a living demonstration of interfaith and intercultural congeniality and creative collaboration in the spirit of the common shared value of the Golden Rule “ Treat others the way you want to be treated”.

Throughout the week we visited sites of deep spiritual significance to the three Abrahamic religions of the Holy Land, including: Mount Nebo, from whose heights Moses saw the Promised Land; Al Maghtas, site of Christ’s baptism; Abu Obeida Mosque, burial site of one of the Prophet Muhammad’s companions; the Mount of Temptation, where Christ resisted Satan; the Church of the Nativity; the Western Wall; the Dome of Rock; Jerusalem Archaeological Park; Ethiopian Orthodox Church; the Sea of Galilee (Kinneret); Megiddo, known as Armageddon; Beit Ha’gefen (the Arab-Jewish Center); and Bahá’í Centre and Gardens, a UNESCO World Heritage Site. Many of these stops included conversations and talks with local leaders and clerics. 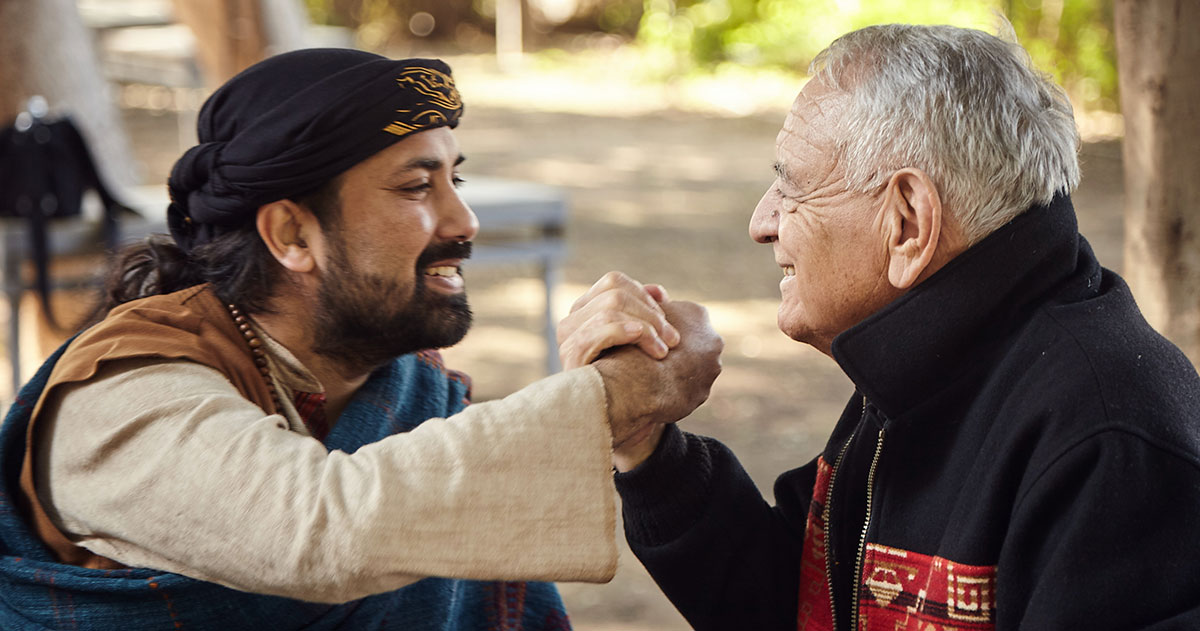 Our journey centered on five primary modes of interfaith exchange:

A primary focus of Holy Land Living Water was the condition of the Lower Jordan River and the bodies of water it flows out of and into—the Sea of Galilee (Kinneret) and the Dead Sea. 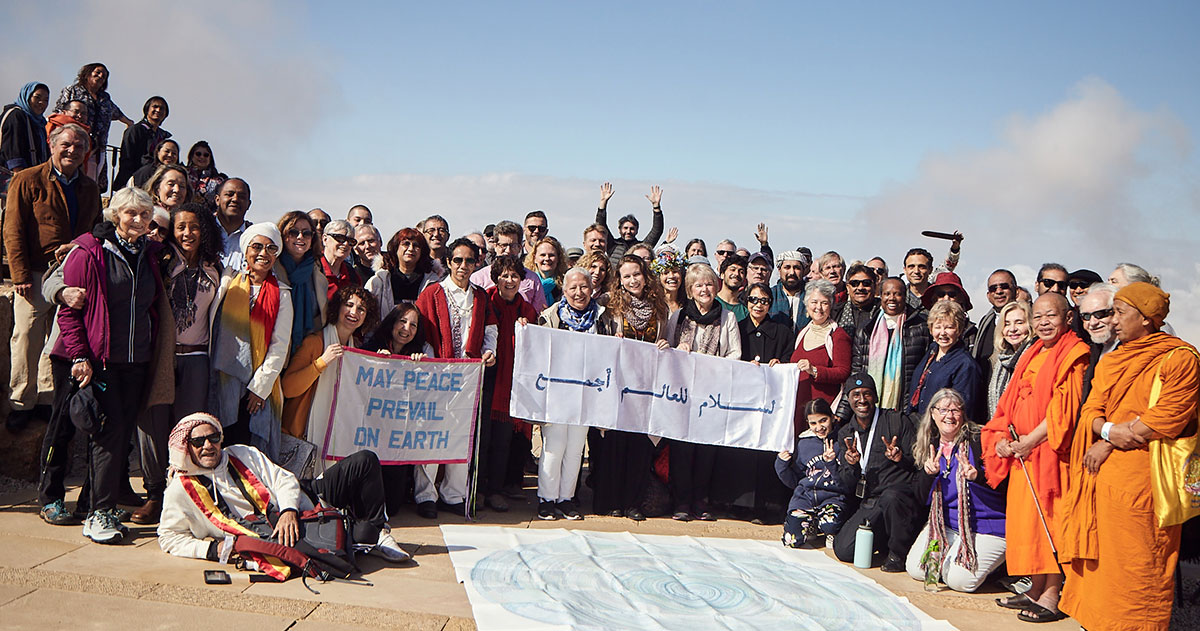 At places of worship along the route, at historic sites, and in natural areas, the congeniality and the spiritual diversity of our group inspired offerings of prayer and ceremony, both planned and spontaneous. 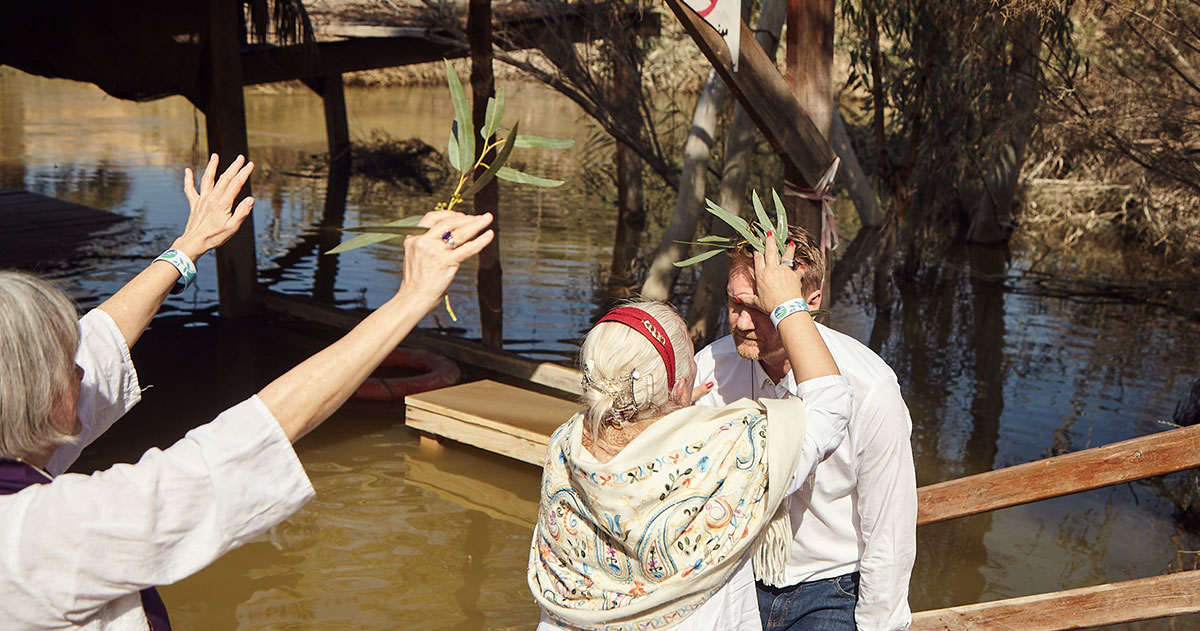 Water Blessings held at the Baptism Site on the Jordan River 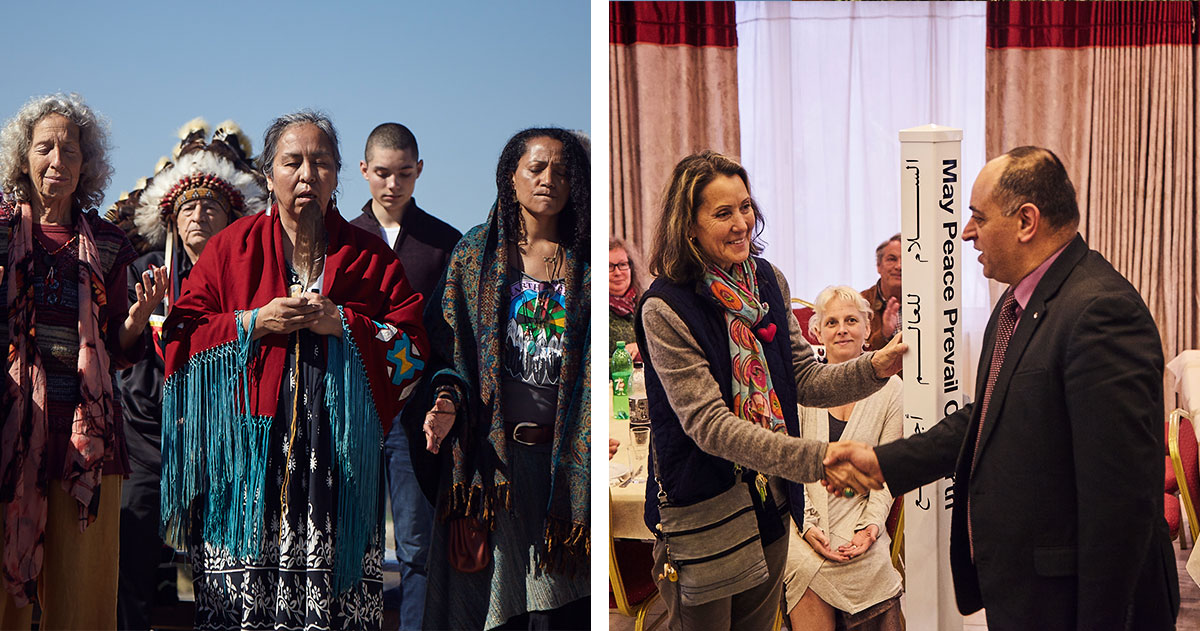 LEFT: Indigenous-led ceremony for Peace at Megiddo   RIGHT: Presenting a Peace Pole to the Governorate of Bethlehem 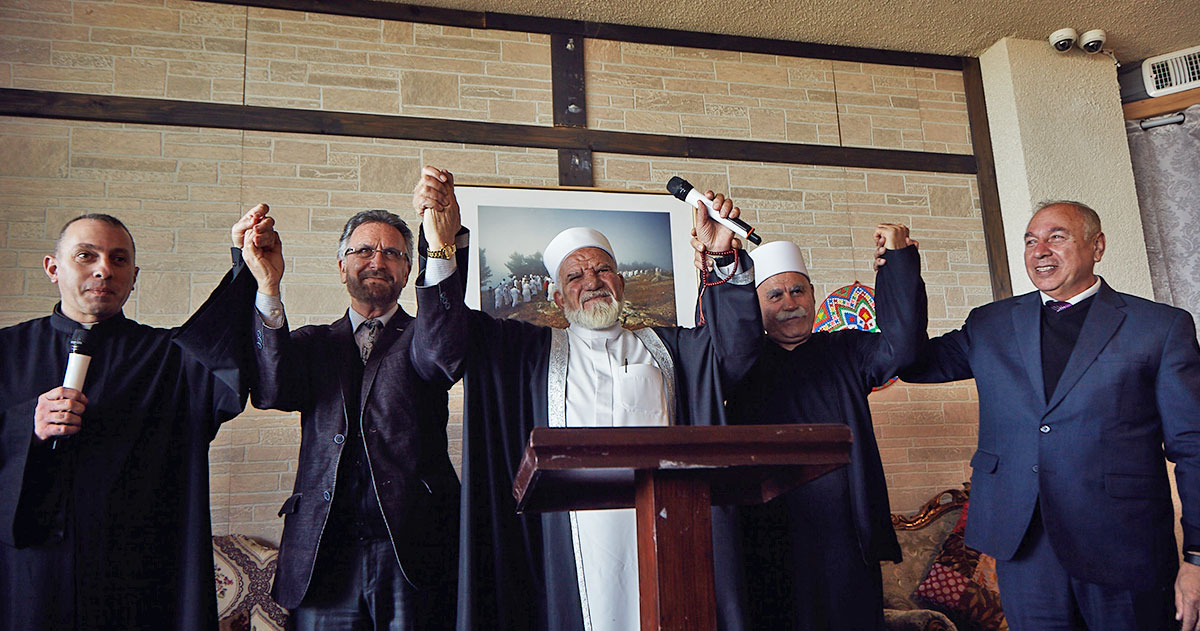 A description of this remarkable journey would not be complete without an attempt to articulate the powerful way in which the experience affected each individual and the group as a whole. We did not punctuate visits to important places with chatter about mundane topics. Instead, the spiritual biographies of the members of the group, the grief and the possibility that places and people we encountered opened in us, and our joy in our shared purpose flowed non-stop, as the Jordan River flows through its beautiful, ancient valley. 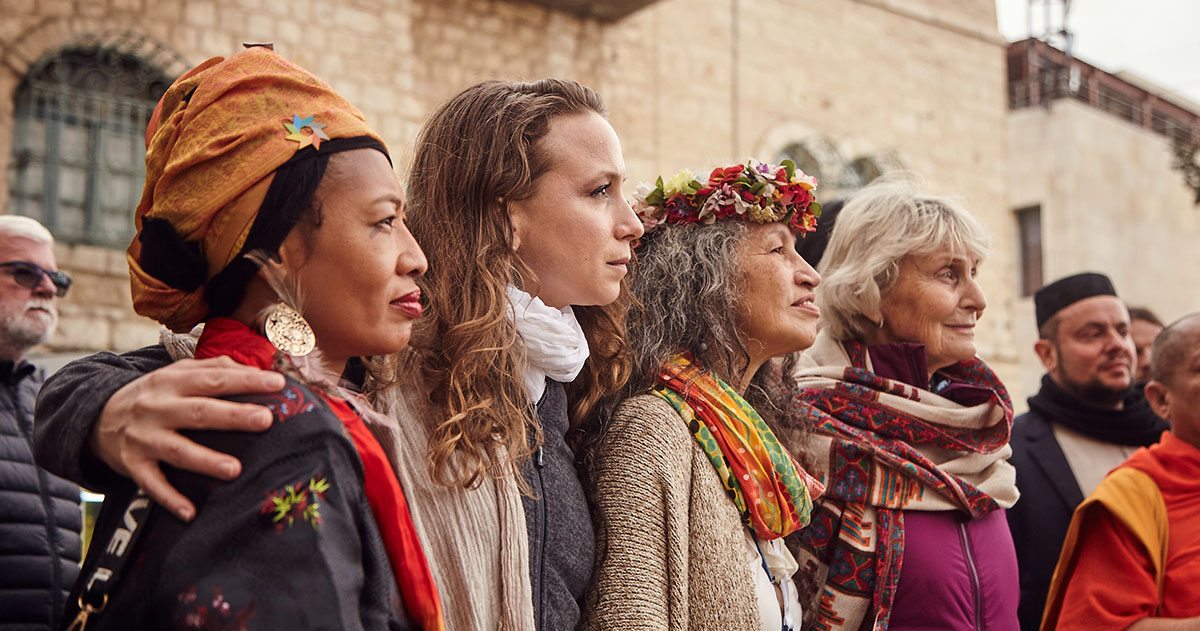 Rising of the Divine Feminine ceremony at the walls of Jerusalem

Religious Leaders and Dignitaries Participating in the Trip

Clergy From Around the Planet Gathered to Pray for the Environment at Megiddo National Park
David Israel, JewishPress.com, February 7, 2020

Pilgrimage to the Promised Land
Trebbe Johnson, to be published in Parabola Magazine in Summer, 2020

— May Peace, Interfaith Harmony and Compassion Prevail on Earth —